Used to vs get used to (British Council LearnEnglish)

‘used to’ to talk about the past

(versus ‘get used to’ – completely different meaning)

When telling a story, you may need to talk about a past situation or habit that has now changed. For this, you can use ‘I used to + infinitive verb’.

Notice that this has a very different meaning from ‘get used to + ing’, which is an advanced structure so don’t worry about it if you find it confusing!

Why is this sound so difficult?

1. It does not exist in many languages.

2. The spelling USUALLY looks completely different e.g. with ‘r’,’l’ and ‘w’, so learners pronounce it every letter, rather than the sound. Learners often struggle to believe that words with such different spellings have exactly the same pronunciation e.g. saw – sore – soar

3. North Americans pronounce this sound differently e.g. ‘law’ sounds like ‘lah’, (see more below) and only use this /ɔː/ sound when the spelling includes ‘r’ e.g. force, four

4. In UK English, there are many regional accents that have their own way of pronouncing this sound in different words and would disagree with the ‘Received Pronunciation’ (RP) rules!

(There are many more words with the ‘or’ spelling)

Many of these homophones and vowel sounds differ according to accents.

‘father – bother’ also share the same /ɑː/ sound (In the UK, they are different).

As with all pronunciation practice, you need to recognise the sound first.

Listen, pause the video, and say the word silently in your head.

THEN repeat the word out loud.

It’s not perfect, but it tells you how well you pronounce these vowels.

The UK Pronunciation of the ‘or’ sound

The US Pronunciation of the ‘ur’ sound

The ‘L’ has different sounds depending on its position in the word [Clear and Dark L].

When L comes before a vowel, as in the words “light” and “late,” it is pronounced with the tip of the tongue against the alveolar ridge, the area just behind the front teeth. This pronunciation of L is called “clear L.”

When L comes before a consonant or occurs at the end of a word, as in the words “fool” and “ball,” an additional movement is made with the back of the tongue, which is raised towards the velum. This pronunciation of L is called “dark L”.

Note that in words like “pole,” L also occurs at the end of a word because the last vowel letter, E, is silent, that is, not pronounced, hence, “dark L.”

Some people pronounce L as “clear L” in all positions. Thus, they pronounce “light,” “late,” and “fool,” “ball.”

In many accents, ‘L’ becomes more like a ‘w’ sound.

This YouTuber has become famous for his ‘Boh-oh-oh-wa-er’ pronunciation videos! [‘bottle of water’]. 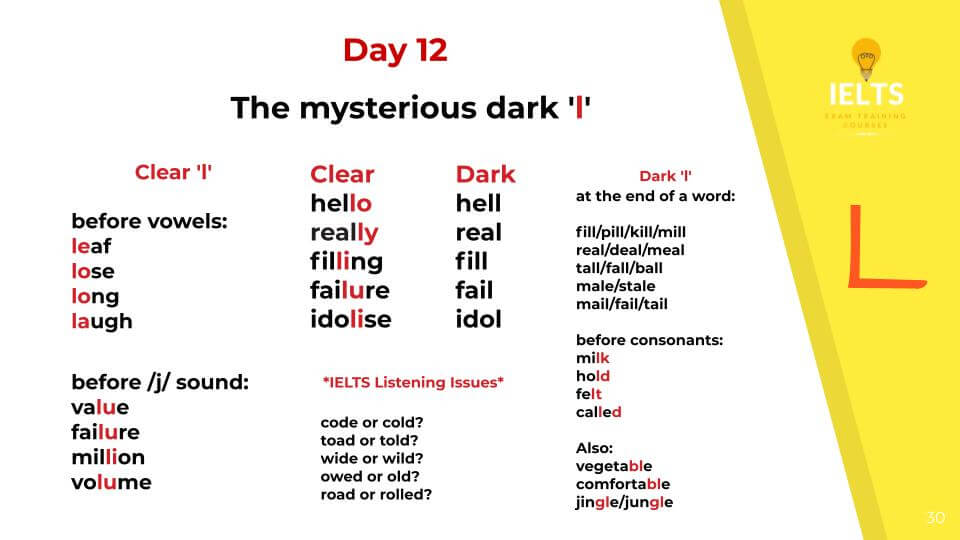