Key vocab from 'Bring back the big cats'

Bring back the big cats – a really nice Academic Passage 2 (good for GT).

The history of the tortoise – very difficult Academic Part 3 with open questions, TFNG, and flowchart.

Well, most people think that lions only come from Africa. And you would be forgiven for thinking this, because in fact most lions do come from africa . But this hasn’t always been the case. If we go back 10,000 years we would find that there were lions roaming vast sections of the globe. But now, unfortunately, only very small sections of the lions’ former habitat remain.

My particular interest is Asiatic lions, which are a subspecies of African lions. It’s almost a hundred thousand years since the Asiatic lions split off and developed as a subspecies. At one time the Asiatic lion was living as far west as Greece and they were found from then in a band that spread East through various countries of the Middle East, all the way to India. In museums , you can now see Greek coins that have clear images of the Asiatic lion on them. Most of them are dated at around 500 BC . However, Europe saw its last Asiatic lion roaming free 2,000 years ago. Over the next nineteen hundred years the numbers of Asiatic lions in the other areas declined steadily, but it was only in the nineteenth century that they disappeared from everywhere but India.

So, how can you tell an Asiatic lion from an African lion, with which you’re probably more familiar? Well, in general, Asiatic lions are not as big as African lions. The colour is more or less the same, but the appearance of the mane is different – that’s the hair around the lion’s face and neck. The Asiatic lion’s mane is noticeably shorter than the African lion’s. Asiatic lions also have a long fold of skin on their underside , whereas not many African lions have this.

Well, I’d like to talk to you now about the Gir sanctuary in India. That’s where I’ve just come back from. The sanctuary was establishedspecifically to protect the Asiatic lion.

It’s 1,450 square kilometres an area and most of it is forest. There are now around three hundred Asiatic lions in India and almost all of them are in this sanctuary.

But despite living in a sanctuary, which makes them safe from hunters, they still face a number of problems that threaten their survival . One of these is the ever-present danger of disease. This is what killed more than a third of Africa’s Serengeti lions in 1994 , and people are fearful that something similar could happen in the Gir Sanctuary and kill off many of the Asiatic lions there.

India’s lions are particularly vulnerable because they have a limited gene pool. The reason for this is interesting – it’s because all of them are descended from a few dozen that were saved by a prince who took a particular interest in them. He was very wealthy, and he managed to protect them – otherwise they’d probably have died out completely.

When you see the Asiatic lion in India, what you sense is enormous vitality. They’re very impressive beasts and you would never guess that they had this vulnerability when you look at them.

The Asiatic lions don’t have the Gir Sanctuary to themselves, I should add. They actually share it with about two thousand farmers. A significant proportion of the lions’ diet is made up of the livestock of these farmers – goats, chickens and so on – as much as a third, in fact. And they’ve even been known to attack humans, especially in times of drought.

One final piece of interesting information – in ancient India one of the greatest tests of leadership for a man was to fight a lion. Now it seems, in modern India it will be a great test to see if the lion can be saved. I’m sure this is something that all of you will share concern for too.

Have you ever had a pet? (What kind?)

Which animals make the best pets (Why?)

What kinds of pets are popular in your country? (Why?)

Do you think it is good for children to have pets? (Why?)

Talk about a wild animal that you find interesting. You should say

and explain what is being done to protect it.

Review the language of natural processes and cycles (Writing Day 25). See the butterfly cycle below.

Some people think it is cruel to keep animals in zoos.

To what extent do you agree or disagree?

[Find the full lesson for this question in Writing Task 2 Essentials – Model Structures.]

Keeping animals in zoos is an important issue today. Proponents of animal rights say it it cruel to cage animals for  whereas others believe zoos are necessary for the protection and survival of many vulnerable species. I will outline both arguments and argue that imprisoning animals for our own entertainment is both cruel and unnecessary.

One of the reasons why people are in favour of zoos is that they believe the animals are safe and protected. this is not always the case. Just because safe from hunters and predators does not mean they are happy and healthy. many animals show signs of abnormal repetitive behaviour when they to small spaces and unable to behave as they would in the wild.

People also argue that zoos serve an educational purpose and that they are vital for conservation. Again, the high entrance fees fund research that could ultimately save a species from extinction, but this only takes place in a handful of zoos and does not excuse the torment that animals have to endure from busloads of children banging on glass windows and rattling their cages.

There is one final argument that is often cited in defence of zoos. That is that they are merely entertainment and that training animals such as seals and killer whales to perform tricks for visitors keeps them mentally alert and physically fit. is no better than the abuse of animals in circuses, most of which have now thankfully been banned.

On balance, I am not in favour of keeping animals in captivity because to my mind zoos are like prisons. If the main aim of a zoo is to protect endangered species, it is by far preferable to breed animals in private nature reserves, away from the public eye as they have done successfully with the panda conservation programme in China.

Lifecycle of a butterfly 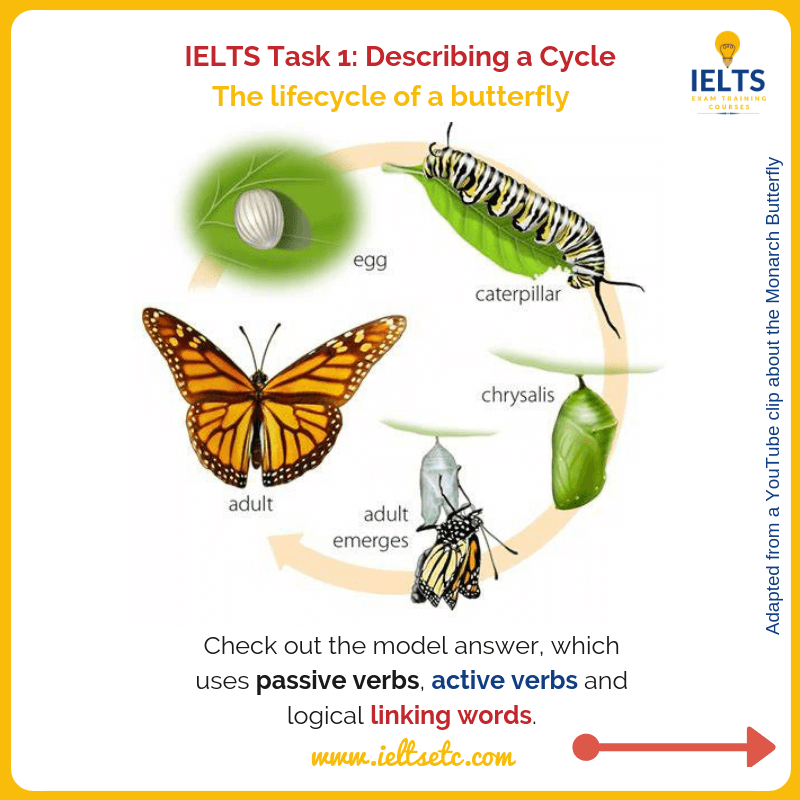 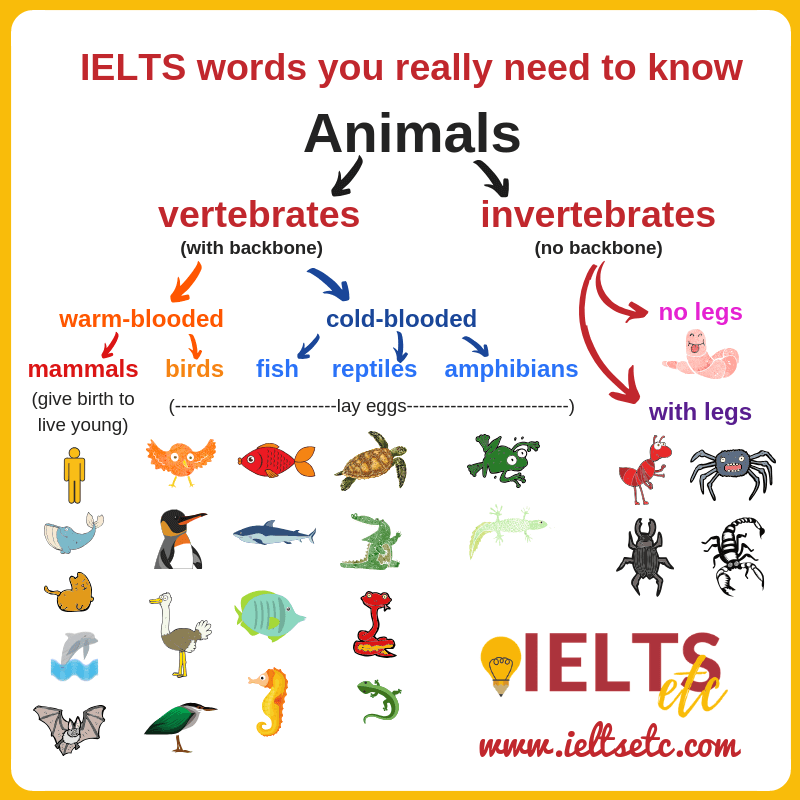 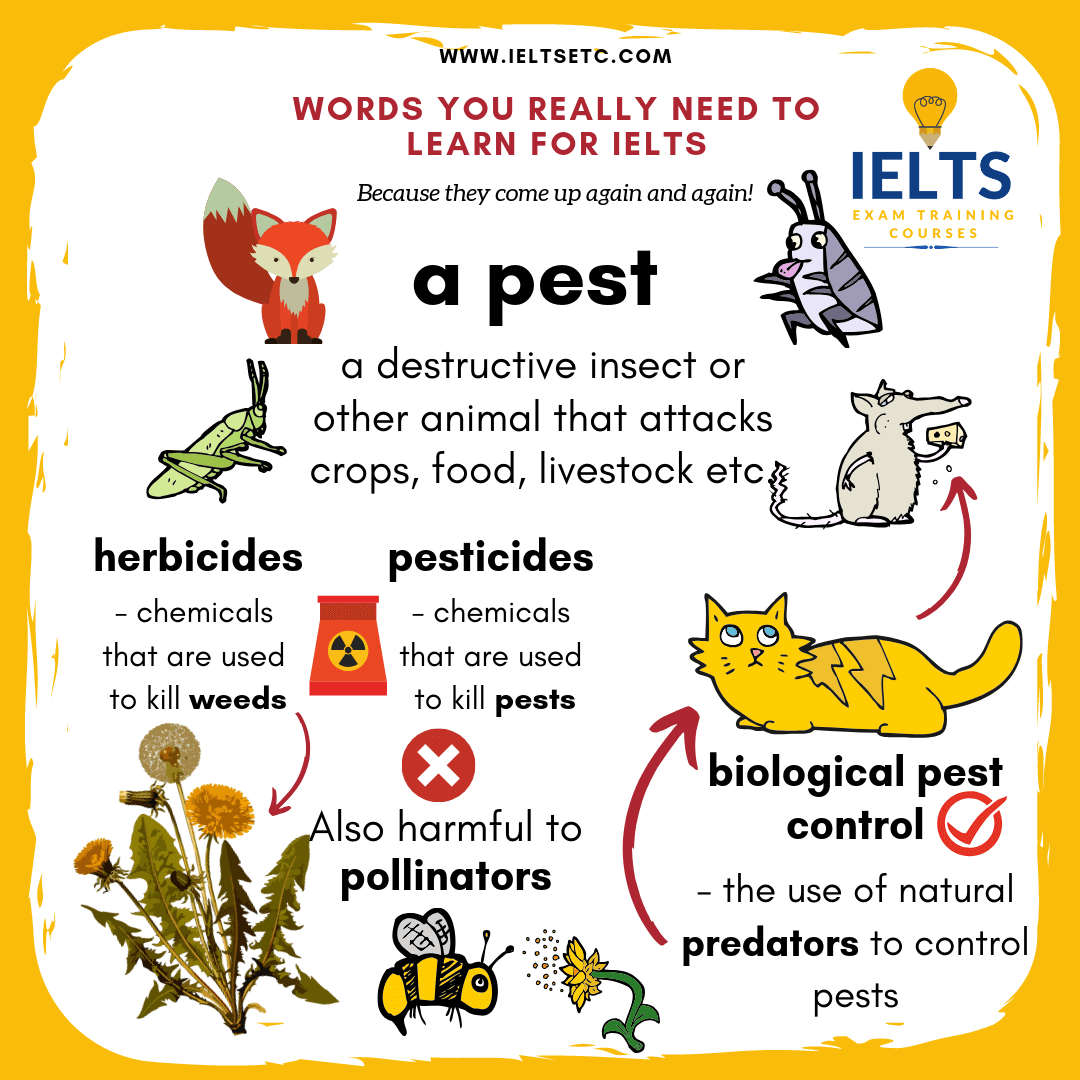 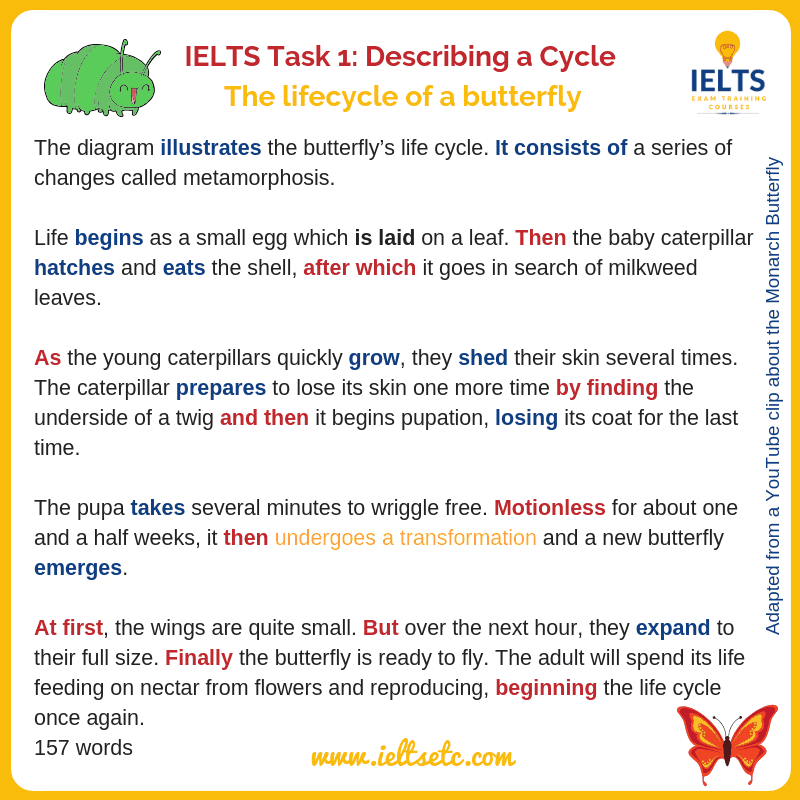 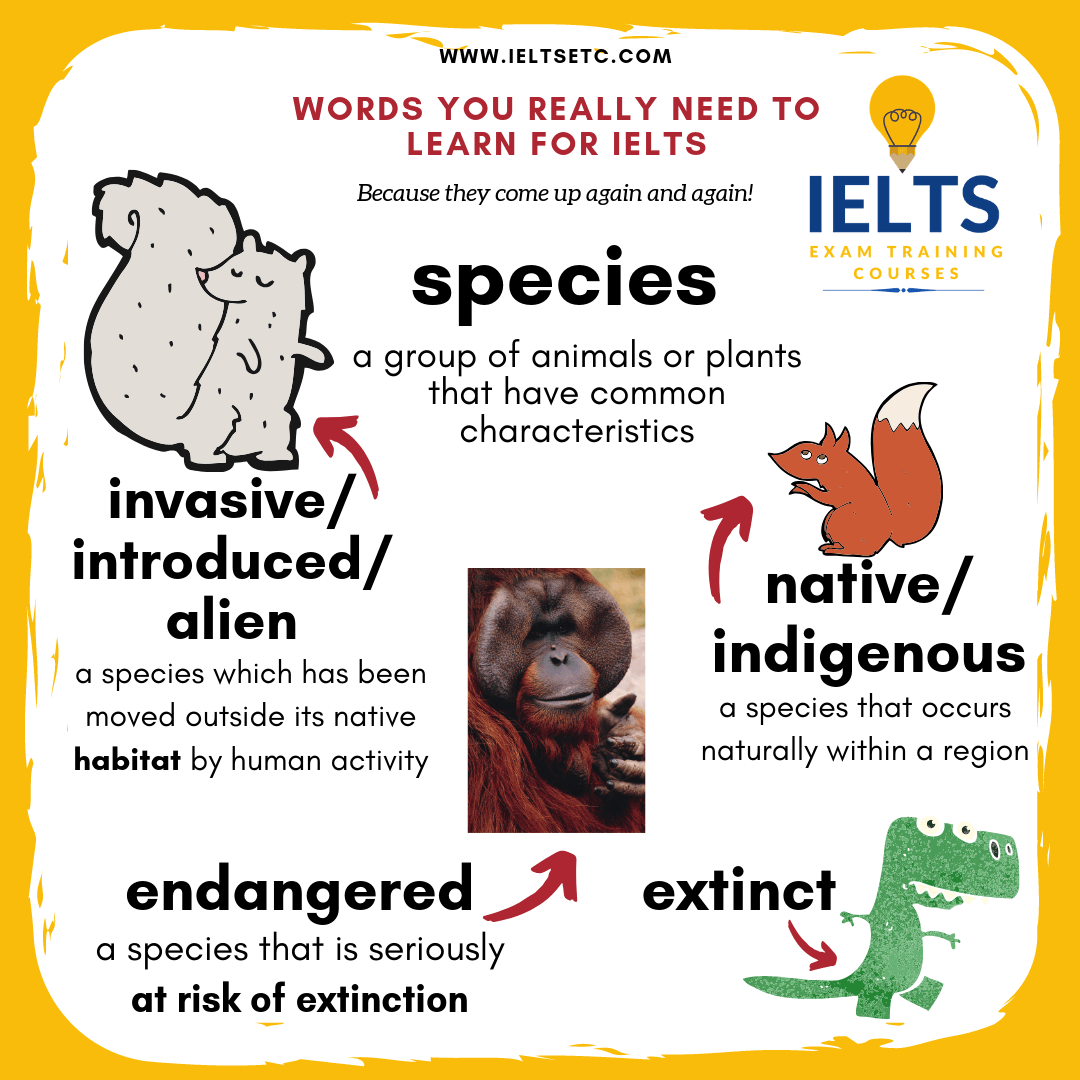 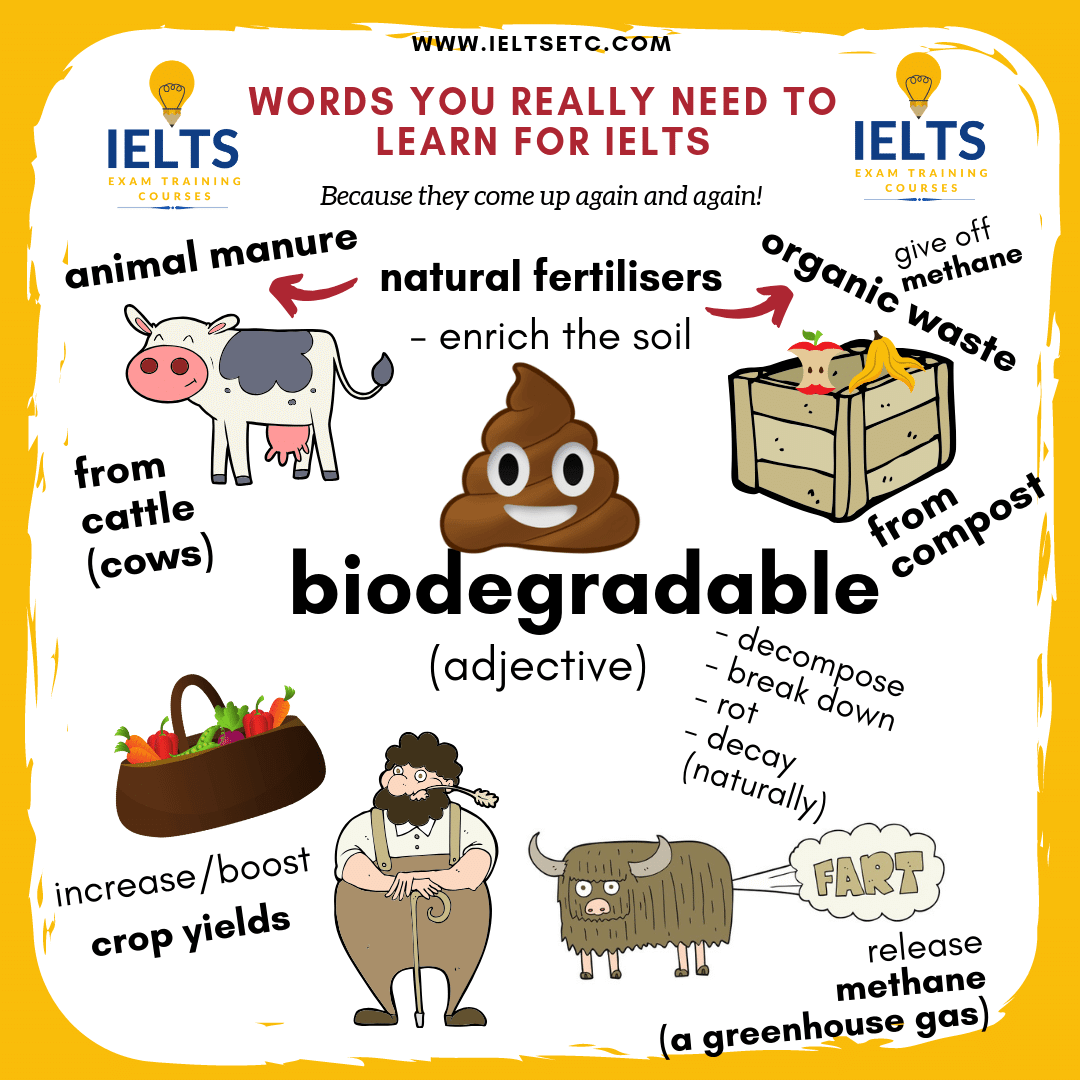 Adaptationthe process of evolutionary change by a species

Aquaticgrowing, living in or frequenting water

Captive breeding (animals which are bred in captivity) is the process of keeping animals in controlled environments, such as wildlife reserves and zoos to help species that are threatened by human activities such as habitat loss or over-hunting or fishing. The opposite of ‘in captivity’ is ‘in the wild’.

Circadiandesignating a biological period of about 24 hours

Deforestation – the action of clearing a wide area of trees.

Extinct – (of a species, family, or other larger group) having no living members.

Evolution – the process by which different kinds of living organism are believed to have developed from earlier forms during the history of the earth.

Flora and fauna – plants and animals; the word “flora” is used to discuss plant life, while the word “fauna” refers to animal life.

Food chaina sequence of feeding types, on successive levels within a community through which energy and biomass (e.g. plants by rodents that by snakes that by hawks)

Foragevegetation taken naturally by herbivorous animals (); the act of searching for and eating vegetative materials (v)

Hatch — to emerge from an egg, pupa, or chrysalis

Immunity/resistance – the ability of an organism to resist a particular infection or toxin by the action of specific antibodies or sensitized white blood cells.

Insectivorea mammal or organism that feeds on insects

Keystone speciesa species that other species depend upon for survival

Larvae — the immature, wingless, and often wormlike stage of a metamorphic insect that hatches from the egg, alters while passing through several molts, and into a pupa or chrysalis from which the adult emerges

Marsupiala mammal of the order Marsupialia that includes kangaroos, opossums, bandicoots and wombats. These females have pouches that contain mammary glands and that shelter the young until fully developed

Mortality (death-rate)the number of animals that die each year

Nocturnalactive by night; the opposite of diurnal

Prey – an animal that is hunted and killed by another for food.

Rarespecies that are uncommon, and usually potentially at risk because of their restricted geographic area or habitat.

Species of Special ConcernSpecies that vulnerable to large-scale population declines. This category is not as severe as endangered or threatened.

Terrestrial — living or growing on land

TerritoryThe concept of dominance over a unit of habitat; an area defended by an animal against others of the same species, or sometimes other species; can for breeding, feeding, courtship, or other reasons.

Threatenedpecies are likely to become endangered if current trends continue. This is the intermediate category between endangered and species of special concern.